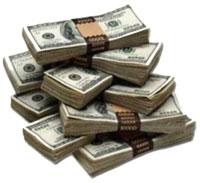 “Money is the material shape of the principle that men who wish to deal with one another must deal by trade and give value for value….Those pieces of paper, are a token of honor – your claim upon the energy of the men who produce.”

“But money is only a tool.  It will take you wherever you wish, but it will not replace you as the driver.  It will give you the means for the satisfaction of your desires, but it will not provide you with desires.  Money is the scourge of the men who attempt to reverse the law of causality – the men who seek to replace the mind by seizing the products of the mind.”

“I have no higher, more reverent tribute to pay to America, for this means: a country of reason, justice, freedom, production, achievement.  For the first time, man’s mind and money were set free, and there were no fortunes-by-conquest, but only fortunes-by-work, and instead of swordsmen and slaves, there appeared the real maker of wealth, the greatest worker, the highest type of human being – the self made man – the American Industrialist.”

For those of you like me that did not have “Atlas Shrugged” on your required reading list in grade school, this is an excerpt from that book by Ayn Rand.  It’s a good sized book and I’ll admit I’m only about half way through, but was struck by some of the thoughts that I have restated above.  In the book (written in 1957), several leading industrialists find themselves facing enormous pressure from the difficult economics of the day combined with a government that seemed intent to make things even tougher for businesses.  Seeking a profit had become uncouth in social circles (like it seems to be in certain “Districts” of our country today) and money is deemed the “root of all evil.”

One could read many things into the thoughts presented in this book.  But what I choose to pull from the thoughts above is that if your greatest desire is to make money; you are seeking a means to an unknown end.  But, the business environment in the U.S. is uniquely arranged to reward those who’s desire is to produce a product or service that others value.  At the turn of the century, Americans valued transportation which lead to great wealth for those who produced it.  For the last 10-15 years, we have placed a great value on information technologies.  I can only guess where the next wave of “self made men” will come from in America, but we should do all we can today to protect the infrastructure in our country that rewards their innovation.

I think the best tactic for success is to focus your energies where your passions lie.  Rather than try to guess what industry will see the next wave of success, you would be better served by doing what you love.  I don’t know that I have ever heard of a very successful man that was not passionate about his product.

This has been another episode of “deep thoughts” by Toby Smith.