I have been asked this question a lot lately. It seems that department managers are once again being asked to look 5 years down the road and predict when the perfect time to sell their current aircraft will be.

I was caught off guard by this question the first couple of times I was asked it. But, I have worked through my answer a bit over the last couple of weeks. Rather than repeat the answer ad nauseum, I figured I would put it in writing and take a more proactive approach. When considering this question, there are a few points you must keep in mind.

1. ALL MAN-MADE ASSETS DEPRECIATE OVER TIME. God made land, so we can’t apply this rule to his work. But the stuff we produce tends to fall apart over time. Depreciation is the reduction in the value of an asset due to usage, passage of time, wear and tear, technological outdating or obsolescence, rot, rust, decay, etc. We sometimes forget that aircraft do depreciate over time. The jet aircraft resale market has only been around for 40 years or so. For the first 15-20 years, production did not fully meet supply, so values of used aircraft did not follow the declining schedule of a more mature industry like automobiles. However, at some point the asset becomes outdated or too expensive to maintain and depreciation will catch up with you – just ask the owner of that Jetstar next door.

2. THE BUSINESS JET RESALE MARKET IS CYCLICLE IN NATURE. This is a fairly obvious statement and just about all industries experience a fluctuating business cycle. The difference is that we tend to experience these cycles in a more extreme way than most and, because of the high cost associated with our products; the price of pre-owed aircraft will have a significant effect on the price & backlog on new aircraft.

3. THE DEPRECIATION SCHEDULE OF BUSINESS JETS TEND TO FOLLOW A DAMPED SINE WAVE PATTERN. Ok, I’ll admit I had the help of Mr. Google to come up with that one. A damped sine wave is one where the peak of each wave, or amplitude, decreases or dampens over time (see picture below). So, the value of that 2009 G-550 you own will see some real high values in good times and will drop proportionately low in bad times. But for that 1968 G-II, while demand may go up and down a bit, its value won’t fluctuate nearly as much as it used to over time. I should also mention, although not pictured, this damped sine wave should be resting on a sloped X-Axis, representing long term declining values. 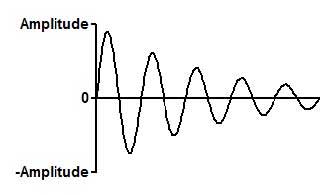 So now that I have thrown a good mix of accounting and geometry at you, where does that leave your airplane? I’ll try to give some general rules for this, but keep in mind these can not be universally applied, the market for aircraft is just too diverse.

The last couple of cycles in our market have lasted around 7-10 years in length-around 5-7 years of expansion followed by a couple of years of pull-back. Prices of aircraft climbed from the early 90’s until about 2001 when we experienced a dramatic correction for the next few years. Once values stabilized, they again started growing until 2008 when the ride started all over. Did events like the first Gulf War, Sept. 11th and the sub-prime mortgage crisis cause these pull-backs or were they just a trigger for an event that would have happened anyway is a topic for another blog.

Let’s look at the bluebook values of two aircraft over the last 10 years. These aircraft should have almost identical performance and cabin dimensions, but should be 10 years apart in production. For this example, I am going to use a 1998 model G-IVSP & a 1988 model G-IV 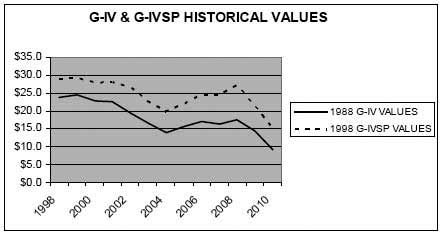 I think the most telling statistic is this:

What this shows is that year of manufacture has a lot to do with the future value of your aircraft. If your aircraft was manufactured in the last 10 years and historical patterns repeat themselves, there is a good chance your value might get within spitting distance of where it was before the Lehman Brothers ate our lunch. If your airplane is older than that, your upside potential is inversely related to the age of your aircraft.